No plant genus is as diverse as the genus Rosa.

Breeders are constantly looking for new varieties and coming up with new roses every year. Each and every one has been bred to exhibit fine qualities with a unique combination of colour, fragrance, habit and flower shape. Within the large assortment of roses, you can find varieties just centimetres tall with tiny flowers that are used as groundcovers, shrubs that produce gigantic flowers, and climbers that can scramble 20 metres up into a tree! Some roses are even thornless.

Cluster-flowered roses
What makes these roses so popular is their great profusion of flowers that are produced in clusters. This group contains many varieties in a wide range of colours, flower shapes and heights. Some – the Florabundas – produce larger flowers, while others – the Polyanthas – produce huge masses of smaller flowers. They include miniature roses that grow no taller than 40 cm as well as patio roses that range from around 30 to 50 cm in height. These last two also make fine pot plants for a terrace or balcony. Roses in this group should be pruned every year to keep them in good condition.

Species roses
Species roses (or wild roses) have remained unchanged from the ones found growing in the wild. Their growth habits are also somewhat less compact than those of cultivated roses. The Beach Rose (Rosa rugosa) is a familiar species rose. Roses in this group are tough as old boots. Their flowering season may be somewhat shorter but their flowers have a heavenly fragrance and attract many bees. They also produce many rosehips that are perfect for making jam or other products. For this reason, species roses make a nice and useful addition to a garden of edible plants or a vegetable garden. Their more natural look also makes them suitable for a wild garden. Species roses don’t actually have to be pruned, but you can cut them back if you think they’ve become too large. All cultivated roses originated from this group.

Climbing roses
As their name suggests, climbing roses take to the sky. They include species roses, large-flowered roses and small-flowered roses in a wide range of colours. Their branches need support; they will have to grow against something like an old tree, a fence, a pergola, or an obelisk. You can grow a climbing rose even if you don’t have a garden; just remove a paving tile, plant a climbing rose in the hole, and let it grow up against the facade of a building. Some varieties will even thrive on a north-facing wall. You will have to give a climbing rose a bit of help, however, since they can’t cling to a surface themselves like ivies do.
Climbing roses that are particularly vigorous are known as ‘ramblers’ and sometimes as ‘vining roses’. Some grow to a height of 4 metres, but others can reach 20 metres. They are characterised by their great profusion of small flowers. Many ramblers have flowers that produce large numbers of rosehips. Let them grow over a garden shed or give an old tree a second life by letting a rambler grow up through its branches. The latest rambler varieties produce a second flush of flowers in autumn.

Shrub roses
Shrub roses can be used in many situations ranging from wonderful rose hedges to large rose beds. Typically, they produce small leaves and many flowers. Most will even thrive in semi-shade. The big advantage of shrub roses is that they need so little maintenance. You can wait three years before pruning them, and they will produce even more flowers without an annual pruning.

Standard roses
Standard roses can be grown from the other five groups, but look different because they have been grafted onto a tall cane. Once grafted, the cane will increase in diameter but not height. They are available in various heights ranging from 50 cm to 150 cm. Climbing roses are often grafted onto taller canes and allowed to dangle elegantly all around. They will grow well as pot plants, but are also nice for creating height in a border made up of lower-growing plants. Standard roses will require some care, however, to remain attractive. 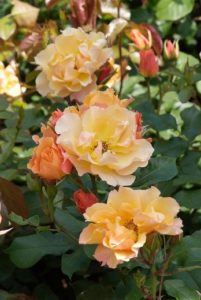 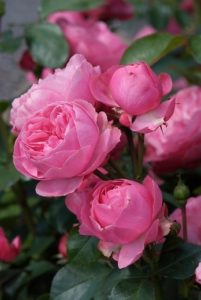 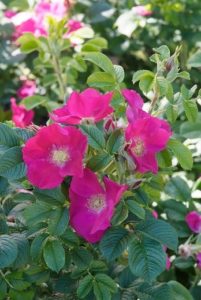 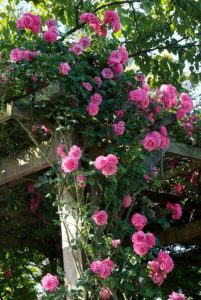 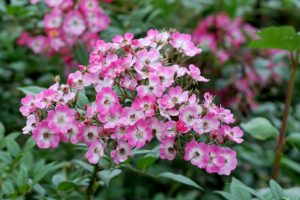 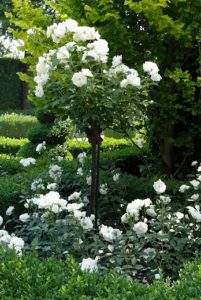